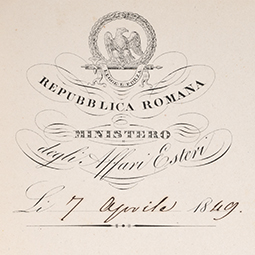 Nicholas Brown (1792-1859) was the U.S. Consul to Italy from 1846 to 1849. He was the eldest son of Nicholas Brown (1769-1841) for whom Brown University is named. This collection contains letters, poems, and autographs received by Nicholas Brown and his wife Caroline Matilda Clements Brown, primarily during Brown's term as U.S. Consul to Italy. Many of the letters relate to the First Italian War of Independence (1848-1849) and the larger Risorgimento movement in Italy. Alexander I, Emperor of Russia