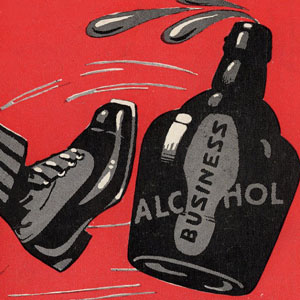 The digitized items in the Alcohol, Temperance and Prohibition Collection are from the Alcoholism and Addiction Studies Collection, as well as from various collections in the Brown University Library — broadsides, sheet music, pamphlets and government publications.

The items have been collected at Brown for over three centuries for researchers and scholars at Brown and worldwide interested in American history, including the history of alcoholism, how the media was used for spreading ideas and information, and in how the arts presented various movements.

The purpose of this digital collection is to give researchers and interested individuals a glimpse into the rich and diverse resources at Brown's library. All of the digital items are in the public domain.

The digitized pamphlets were published by various groups leading up to prohibition, during the prohibition era, and ending with the 21st amendment in 1933, which repealed the 18th amendment from 1919 prohibiting the manufacturing, sale or transportation of intoxicating liquors.

"Bill" and the water wagon "Buy your own cherries!" "I would like to see someone get him in" "I've got it!" or, The rumseller jubilant "Just a couple of highballs": The old observer speaks his mind on the very timely subject of drinking drivers The "picked half million" their doings: The strategic organization of them all The "principle" of prohibition "Prohibition in the south": An account of a bogus "investigation" perpetrated by the banking world of Chicago, and finance of Cleveland. The whole thing being merely the product of a New York advertising agency "Wet or dry": A saloon circular full of misleading statements, an exposure of some