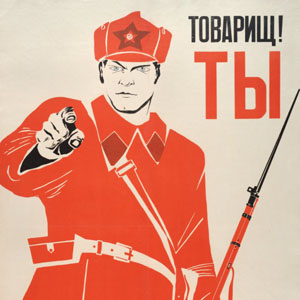 Seventeen years after the end of the Soviet Union, the exhibition at the David Winton Bell Gallery at Brown University in 2008, Views and Re-Views invited a post-Cold War assessment of Soviet graphic arts. The exhibition suggested that artistic merit may be found in art in the service of political belief and subject to state regulation — even though the Soviet Union’s self-consciously political attitude toward art made the artist’s lot complicated. These posters, caricatures and cartoons also demonstrate a range of stylistic diversity within work that is too often simply dismissively characterized as Socialist Realism. Finally, with the passage of time it has become possible to see that not all criticisms of the West by Soviet artists are completely spurious or inauthentic. All of the objects in the exhibition were on loan from an anonymous private collection.

1. Everyone fulfilled the Soviet plan

1. It is, you know, they who represent countries and peoples.

1. Those are the weapons our factories used to produce

2. I wasted no time and worked with dedication

2. Now we have a new kind of weapon to use

3. For Spring's arrival we must prepare

3. For this I was immediately rewarded

3. Persians, Turks, Japanese, Chinese, and Koreans range themselves under the banner of the East.

4. America, Africa, Australia are with us; colonies broke the links of their chains

4. Get the plough and harrow in full repair

4. With a prize and a decoration!