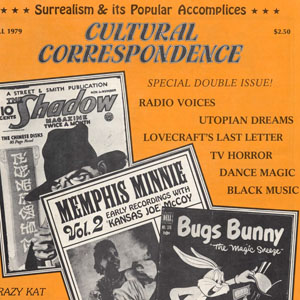 A journal born from the collapse of the New Left and hopes for a new beginning of a social movement, but also of left-wing thinking about culture, Cultural Correspondence was in many ways a unique publication.

Its founding editors, Paul Buhle and Dave Wagner, had both served on the editorial board of the journal Radical America, founded in 1967. Buhle had been the founder of that bi-monthly journal, creating it out of a network of activist-intellectuals in the Students for a Democratic Society; Wagner was officially "Poetry Editor," but after its shift from Madison, Wisconsin, to the Boston area in 1971, he became a member of an expanded board of editors. Together they taught at the Cambridge-Goddard Graduate School, then Wagner left for Europe and Buhle left the editorial board, moving to Yonkers. An exchange of letters from these locations spawned the notion of a new publication. It was to be the first radical magazine put out by members of a generation that had since childhood watched television and appreciated as well as enjoyed a considerable portion of it, also films and "pulp" literature.