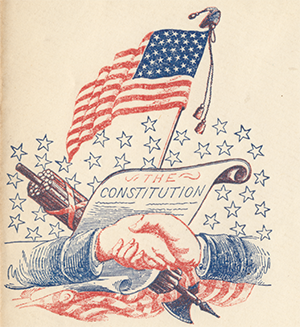 This collection contains embellished envelopes created during the period surrounding Lincoln’s presidency and the time immediately after his assassination. Many of the envelopes depict Lincoln himself, as well as various notable political and military figures. The artwork widely ranges in its tone: at times patriotic and celebratory, later mournful, and even occasionally satirical, all addressing relevant issues contemporary to Lincoln’s time as president.

"Shoot the first man that attempts to haul down the American flag." J.A. Dix 'Aid and Comfort for the Enemy.' 'Contraband of War;' or Volunteer Sappers and Miners from the 'F.F.V.' 'Him! the first great martyr in this great cause.' 'I shall offer this prayer upon the altar of my country.' 'Long shall it wave.' 'Old Abe' the Man for the Times. 'The Flag Our Fathers Fought for.' 'Let it be Ours Untarnished.' 'The Union, it must be preserved.' 'They can afford to do a wrong, I cannot.'