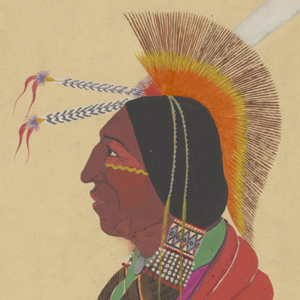 Stephen Mopope (1898-1974) was a Kiowa painter, dancer, and flute player of Spanish descent, from Oklahoma. He was the most prolific member of a group of Kiowa artists known as the Kiowa Five. This collection contains 7 gouache paintings that Mopope created between 1929-1933. Each one is signed and dated by Mopope. They depict a Zuni arrow swallower, an Apache man, a man performing the sun prayer, a flutist, a flute dancer, a Kiowa drummer, and the portrait of an old man and woman. They came to the Brown University Library through the estate of Mary Elizabeth Sharpe. These images have been added to the Brown Digital Repository with permission from Vanessa Paukeigope Jennings, the grand daughter of Stephen Mopope.

Portrait of a man and woman

Portrait of an Apache man