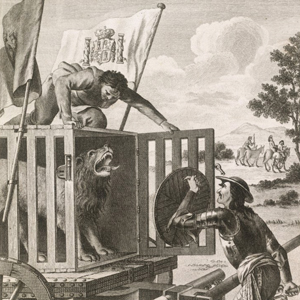 In the fall of 2005, the Brown University Library celebrated the 400th anniversary of the publication of El ingenioso hidalgo Don Quixote de La Mancha with an exhibit featuring book illustrations and title pages from the first edition of this novel in 1605 to 2004.

Considered to be the first modern novel and one of the most widely read, publishers worldwide have produced many unique illustrated editions of El Quijote over the last four centuries. World-renowned artists such as William Hogarth, Jean-Honoeé Fragonard, Honoré Daumier, Gustave Doré, Francisco de Goya, Salvador Dalí, and Pablo Picasso have portrayed the character of Don Quixote from a madman to a misunderstood hero.

"According to the laws of arms, you really injure yourselves, in thinking yourselves affronted."

"Alas ! where are you, lady dear, That for my woe you do not moan?"

"Alas!" answered Sancho, "I found him in his shirt, lean, pale, and almost starved, sighing for his lady Dulcinea."

"Another damsel comes into the room, and begins to inform him what castle that is, and how she is enchanted in it."

"At the duchess's request, he related the whole passage of the late pretended enchantment very faithfully."

"Be not impatient, O Knight of the Woeful Figure, at your imprisonment."

"By the sun that shines, I have a good mind to run thee through the body with my lance."

"Come back, my dear daughter, for I forgive thee all."

Description:
Zoraida's father calls to her from the shore as the boat she is on sails away in the distance.
Year:
1864
Contributor:
Doré, Gustave, 1832-1883 (artist)
Pisan, Heliodore Joseph, 1822-1890 (engraver)
Genre:
engravings (prints)
Collection:
Brown University Library
Illustrated Quixote

"Come hither," said he, "my friend; thou faithful companion and fellow-sharer in my travels and miseries."

"Don Quixote asked the first for what crimes he was in these miserable circumstances."

"Don Quixote descried a company, whom, upon a nearer view, he judged to be persons of quality."

"Don Quixote gazed with dubious and disconsolate eyes on the creature whom Sancho called queen and lady."

"Don Quixote was not so much amazed at his enchantment as at the manner of it."

"Don Quixote was transported with joy to find himself where he might flatter his ambition with the hopes of fresh adventures."