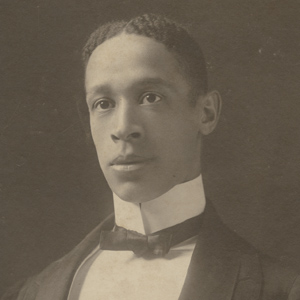 A collection of 77 vintage photographs, primarily from the early 20th century, the bulk of which is dated between the years 1915 and 1925, formerly owned by Blondie Robinson, an accomplished African-American vaudeville performer of that era. The heart of this collection is comprised of photographs directly associated with Robinson himself that represent a visual composite of his professional life on stage, both as a solo performer and in collaboration with others. It offers substantive documentation about Robinson's repertoire of stage acts and his versatility as a vaudevillian -- the various characters he portrayed on stage, including blackface caricatures, his comedic sensibility, the sheer physicality of his performances, and the various costumes and props that he used. This collection also contains a significant number of photographs of other vaudeville performers, primarily but not exclusively African American, all of whom were professional associates of Robinson. Also of note in this collection are a few informal photographs of Robinson, alone and with others, some of whom are presumed to be members of Robinson's family and may even include images of his wife and daughter. Last but not least, this collection also includes useful pieces of textual information found on some of the photographs in the form of signatures, inscriptions, photographers marks, and annotations.