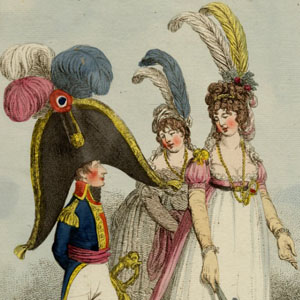 The Napoleonic satires housed in the Anne S. K. Brown Military collection of the John Hay Library represent several important gifts made to the library in the 20th century. In addition to the Napoleonic satires located in the military collection bequeathed by Ms. Brown, Paul Revere Bullard (Class of 1897) and William H. Hoffman contributed a variety of significant objects with a Napoleonic theme. In addition to print caricatures and satires, their donations include historical volumes, manuscripts, sculpture, and some paintings.

These gifts were presented by their donors to the John Hay Library in the hope that their collections would be accessible to members of the Brown academic community and to the community at large, for purposes of research and pleasure. In digitizing these images and making them available to the internet community, these prints are made being available to a wide audience for uses beyond traditional academic research. Perhaps neither the donors nor their families could have imagined their gifts could be made so publicly accessible. Considered with other forms of military memorabilia, satiric prints serve as a reminder that printed images were effectively used as a weapon of sorts. As such, satires made in Britain and continental Europe that depict Napoleon as a diminutive brat combat Napoleon's self-constructed imperial image as a powerful god-like ruler. Satires such as these participate in a broad conversation that spans genres to suggest that the official French images of Napoleon are no more authentic or permanent than the satiric image. To this day Napoleon's imperial image is popularly conflated with his satirical representation — namely his short stature, which is largely a satiric invention.

"Praetor-Urbanus;" - inauguration of the coptic may of Cairo, preceded by the procureur de la commune

Description:
This satire is one of Gillray's Egyptian Sketches parodying the French army in Egypt. The series was based on a set of letters intercepted en …
Year:
1799
Contributor:
Gillray, James, 1757-1815 (caricaturist)
Subject:
Napoleon > I, Emperor of the French > 1769-1821 > Caricatures and cartoons
Collection:
Brown University Library
Prints, Drawings and Watercolors from the Anne S.K. Brown Military Collection
Brown University Library
Napoleonic Satires

Description:
Napoleon sits on a stool and blows bubbles for his son. The bubbles are labeled with places conquered by Napoleon. This version has not been …
Year:
1814
Contributor:
Voltz, Johann Michael, 1784-1858 (caricaturist)
Subject:
Napoleon > I, Emperor of the French > 1769-1821 > Caricatures and cartoons
Collection:
Brown University Library
Prints, Drawings and Watercolors from the Anne S.K. Brown Military Collection
Brown University Library
Napoleonic Satires

After the invasion - the levée in masse, or Britons strike home

After-peice to the tragedy of Waterloo--or--Madame François and her managers!!!

The Allied Bakers or the Corsican Toad in the Hole

The allied efforts, or political struggle

Description:
In this image, as in the Cruikshank from which it derives (see Notes), five monarchs attempt to climb a soaped or greasy pole. The Austrian …
Contributor:
Cruikshank, George, 1792-1878 (designer)
Subject:
Napoleon > I, Emperor of the French > 1769-1821 > Caricatures and cartoons
Collection:
Brown University Library
Prints, Drawings and Watercolors from the Anne S.K. Brown Military Collection
Brown University Library
Napoleonic Satires

The Allies shaving shop or Boney in the suds

Anticipation for Boney or, a court martial on the cowardly deserter from the GRAND ARMY

The apotheosis of Hoche

Apotheosis of the Corsican phoenix

An attempt to swallow the world !!!

An attempt to undermine John Bull, or working through the globe

The balance of power