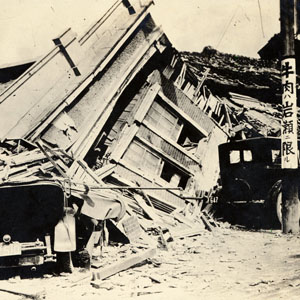 In August 1923, William Dana Reynolds, with his wife Vera Hunt Reynolds and their young daughter Helen embarked from Honolulu on the Japanese steamship Taiyo Maru, bound for Yokohama. While at sea, the ship experienced and survived a tsunami only to arrive, badly damaged, in Yokohama Bay on September 8th as witness to the destruction caused by the Great Kanto Earthquake. Fully aware of the risks involved, eight of the male passengers decided to leave the ship and enter the city. Dana Reynolds was among them. For the next few hours, and later, upon his return several days after the initial quake, he recorded a series of compelling images of the horror and devastation.

And will you think of us who wait

Description:
Newspaper clipping of poem: And will you think of us who wait/The weary miles away?/Tis a summer camp and a gay/good time/Yes, the bird must …
Year:
1923
Genre:
clippings (information artifacts)
Collection:
Brown University Library
Great Kanto Earthquake of 1923

Description:
Atop a bridge, some sort of locomotive, train car, or automobile is turned on its side. It seems that the men on side are involved …
Year:
1923
Contributor:
Reynolds, William Dana, 1893-1970 (photographer)
Genre:
photographs
Subject:
Earthquake damage > Japan
Collection:
Brown University Library
Great Kanto Earthquake of 1923

Boats of refugees being taken aboard the Taiyo Maru

Bodies amidst water and debris

Bodies by the water's edge

Bodies in river amidst debris

A brick building and a bridge

Description:
In the foreground is the brick foundation of a fallen building. In the background, a bridge balances precariously over the river, in danger of toppling …
Year:
1923
Contributor:
Reynolds, William Dana, 1893-1970 (photographer)
Genre:
photographs
Subject:
Earthquake damage > Japan
Collection:
Brown University Library
Great Kanto Earthquake of 1923

Description:
On a bridge; one car inches forward, and the other on its side in the foreground amongst debris piled to the side. All the debris …
Year:
1923
Contributor:
Reynolds, William Dana, 1893-1970 (photographer)
Genre:
photographs
Subject:
Earthquake damage > Japan
Collection:
Brown University Library
Great Kanto Earthquake of 1923

A busy street in Yokohama

Clearing out the debris

Committees in sports and entertainments