Voyage of the Sally 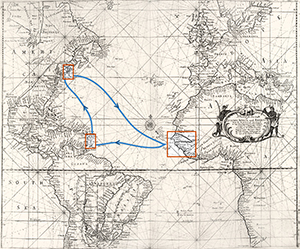 Documentary evidence of the first slave trading voyage sponsored by the Brown brothers of Providence, RI.This project arose from the work of the Brown University Committee on Slavery and Justice, led by James Campbell. The committee investigated the contributions that slavery made to the early days of Brown University, and recommended ways to make the community at large think productively about slavery and and its aftermath. The Voyage of the Sally site was published as part of the committee's final report, which was released in October, 2006.

In 1764, a one-hundred ton brigantine called the Sally embarked from Providence, Rhode Island, to West Africa on a slaving voyage. The ship was owned by Nicholas Brown and Company, a Providence merchant firm run by four brothers – Nicholas, John, Joseph, and Moses Brown. The Sally's voyage was one of roughly a thousand transatlantic slaving ventures launched by Rhode Islanders in the colonial and early national period, and one of the deadliest. Of the 196 Africans acquired by the ship's master, Esek Hopkins, at least 109 perished, some in a failed insurrection, others by suicide, starvation, and disease.

Records of the Sally venture are preserved in the John Carter Brown Library at Brown University, as well as in the archives of the Rhode Island Historical Society.

Description:
This document is an account, apparently from August, 1764, from Esek Hopkins to Moses Brown listing all that he had paid for goods and services …
Year:
1764
Contributor:
Hopkins, Esek (creator)
Brown, Moses, 1738-1836 (recipient)
Genre:
accounts
Collection:
Brown University Library
Voyage of the Sally
Brown University Library
Steering Committee on Slavery and Justice

Articles for the brig Sally: September, 1764

Description:
Though most of the Brown brothers trading activities were directed to the Caribbean, they also traded with mainland colonies. A voyage to Virginia by the …
Year:
1763
Contributor:
Braxton, Carter (creator)
Nicholas Brown & Co. (recipient)
Genre:
letters (correspondence)
Collection:
Brown University Library
Voyage of the Sally
Brown University Library
Steering Committee on Slavery and Justice