Paris: Capital of the 19th Century 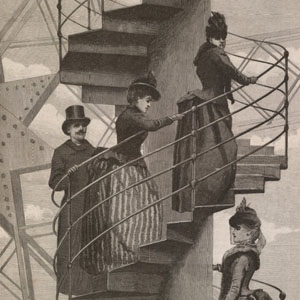 The project, "Paris, Capital of the 19th century," initiated by the French Studies and Comparative Literature Departments of Brown University, provides a window into the cultural, political and social context of 19th century Parisian culture.

It offers online access to pictorial works and texts selected from the collections of the Art Slide Library, the Rockefeller Library and the John Hay Library at Brown University. The majority of the materials are drawn from the Anne S. K. Brown Collection and the Starred Books Collection housed at the John Hay Library. These two collections provide a particularly significant and informative perspective on the political, cultural and social movements of this time period. Parisian society, military operations and dress, well-known personalities, and cityscapes are among the many subjects of images in the collection. Of particular interest to researchers is the inclusion of entire works — full text and images — for selected books and periodicals. "Now my Flower Pot Will Have Some Sunshine"

"The Hailstorms of March"

Description:
Despite Haussmann's enormous power and influence over the city's developmental progress, his work grew to be more and more scrutinized by the public as time …
Subject:
Haussmann, Georges Eugène, baron, 1809-1891 > Caricatures and cartoons
Art > Caricatures and Satires
Collection:
Brown University Library
Paris: Capital of the 19th Century

Description:
A man in a medieval costume shouts directions to a group of soldiers who are going in the opposite direction. A woman representing the French …
Year:
1851
Contributor:
Vernier, Charles, 1831-1887 (lithographer)
Subject:
France > Politics and government > 1848-1852
Art > Prints
Government and Politics > Uprisings
Art > Caricatures and Satires
1848-1852 (The Second Republic)
Collection:
Brown University Library
Paris: Capital of the 19th Century

Description:
Napoleon III is being pushed, in the "chariot of state", toward a hill which has stone tablets of the Constitution of 1848 on top of …
Year:
1848
Contributor:
Vernier, Charles, 1831-1887 (lithographer)
Subject:
France > Politics and government > 1848-1852
Napoleon III > 1808-1873 > Emperor of the French
Art > Prints
Government and Politics > Political & governmental figures
Art > Caricatures and Satires
1848-1852 (The Second Republic)
Collection:
Brown University Library
Paris: Capital of the 19th Century